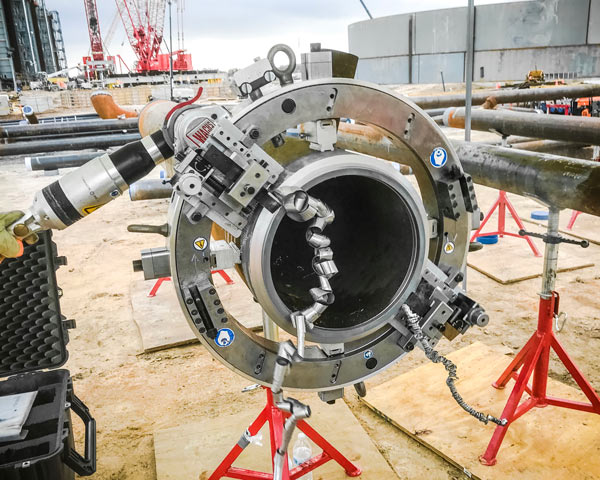 E.H. Wachs DynaPrep Split Frames are the world’s most versatile and comprehensive line of clamshell style, field portable pipe cutting and beveling machines on the market today. Designed to cut, bevel, single point, counterbore and face flanges on pipe ranging from .5 to 120 inches O.D. (DN15-3000) on most wall thicknesses and materials, E.H.Wachs has a split frame to fit most size pipe, tube or vessels.

DynaPrep split frames are named for their ability to split in half at the frame, or “break open” and bolt back together again. This allows them to open and mount around the O.D. of inline piping, or they can be slipped closed over open ended pipe. All Wachs DynaPrep split frames are built to last a lifetime and engineered to apply precise, consistently square cuts and bevels the first time, every time. 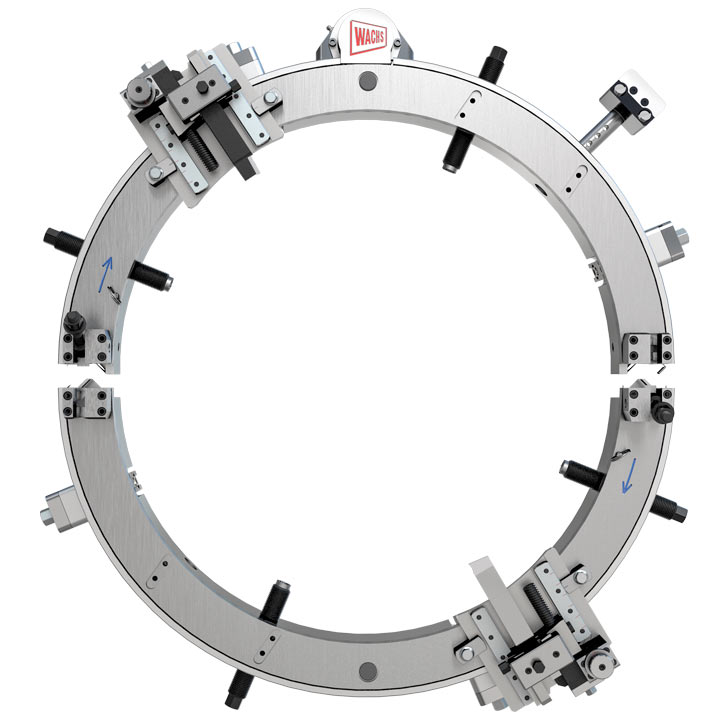 Split Frame - A field-portable clamshell-style pipe cutting and beveling machine tool (lathe) that splits to mount to in-line pipe, tube, and flanges. Structurally it features a fixed rigid frame or ring for support and mounting, and a rotating ring for attaching machining modules and tooling. Both rings split to allow the whole machine to clamp or hinge around a pipe, tube, or flange's outside diameter (O.D.), prior to machining. During the machining process, the machine tool modules attached to the rotating ring perform specific functions (cutting, beveling, resurfacing, facing, or counterboring), while the fixed, rigid frame the rotating ring travels around stays securely mounted to the pipe, tube, or flange.
Also known as: Clamshell, Ring Lathe, Pipe Cutter, Pipe Beveler, Pipe Cutting Machine

In regard to cutting applications, all DynaPrep pipe weld prep machine tools perform inline pipe cutting, can cut off pipe ends, and sever corroded and damaged pipe. A pipe cutter by nature, these pipe cutting machines can also simultaneously cut and bevel inline pipe and perform work in pipeline applications with normal and heavy wall pipe. For heavy wall pipe additional modules are available. Additionally, each machine acts as a pipe beveler, beveling inline pipe, can bevel pipe ends and act as a pipe end prep beveling machine tool, can chamfer inline pipe and bevel pipelines. In certain applications where a compound bevel is needed, the DynaPrep can act as a compound beveler, beveling with form tools or single point machining complex preps such as j-prep bevels.

When the need arises to counterbore pipe, the DynaPrep series of rotating lathe machine tools can be outfitted with counterbore modules, enabling counterboring and deep counterbore machining of pipe ends creating desired lands for welding.

We use cookies and similar technologies on our Website to ensure you the best browsing experience. Read about how we use cookies and how you can control them in our Privacy Statement.
If you continue to use this site, you consent to our use of cookies.